Saving Style | The Bowery circa 1940s and Collecting Nightclub Photos 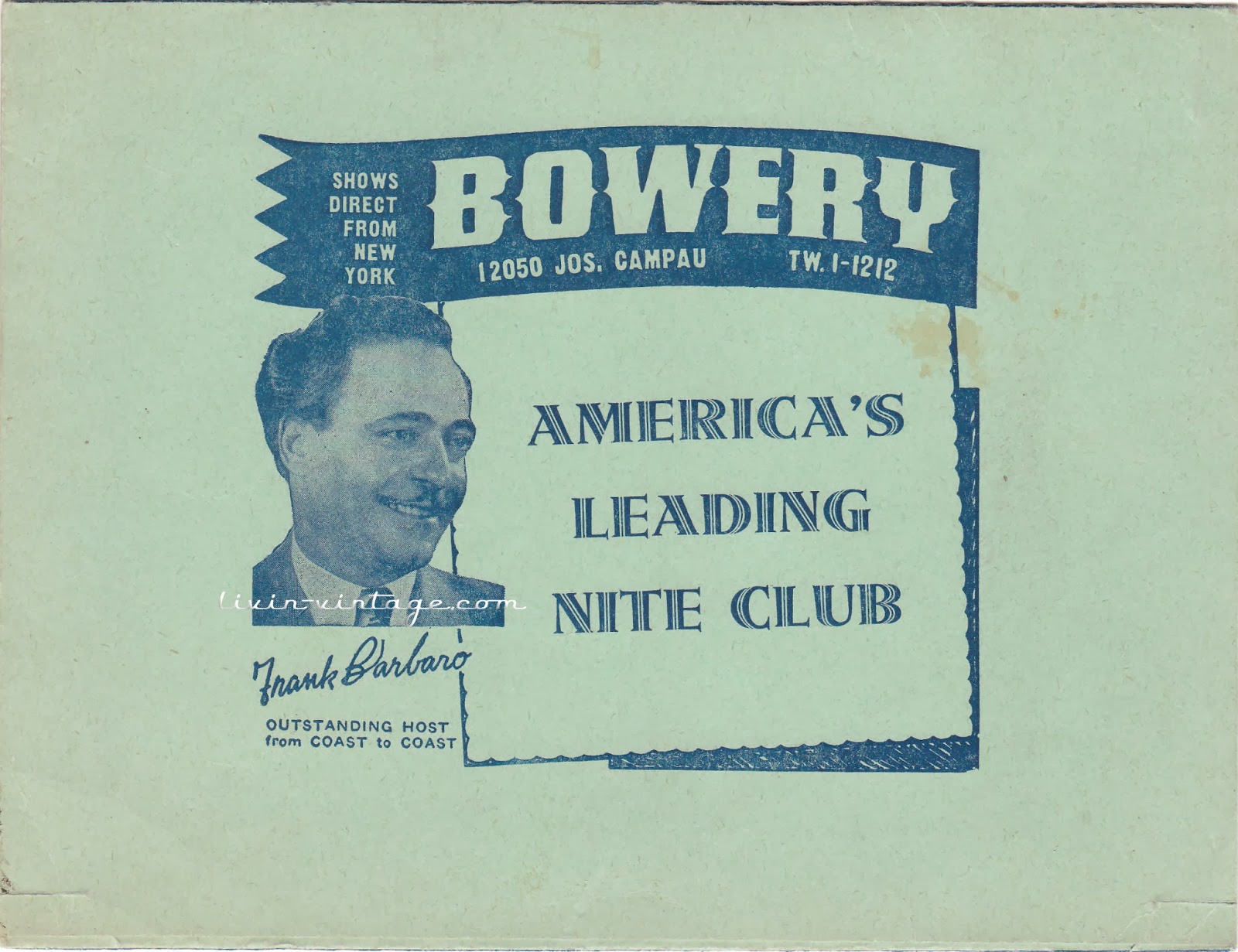 I am a sucker for old photos, but I especially love to find 1940s nightclub souvenir photos.  You know, the kind that are incased in a slim cardboard frame with a flap cover naming the bar/club the photo was shot at.  Since cameras at this time were bulky and required a flash attachment, many bars and clubs would over photography services.  Think of these like the photos amusement parks take while on a roller coaster.   I love that these photos came in a frame -- helping to document and preserve the picture itself.  My favorite in my collection is from my Grandma, taken during the 1940s at the Bowery in Hamtramck, Mi (a city housed within Detroit's city limits).

The Bowery Cafe was a pretty major nightclub in it's day.  Some people even recall it being much like the nightclub Ray Liotta takes his dates to in Goodfellas, where tipping the the head waiter resulted in your own special table set up complete with carrying it to the center of the floor.

From HamtramckStar.com:
"The Bowery drew major talent who would come to Detroit on tour, and it was not uncommon at any given time at The Bowery to see performers such as Jimmy Durante sitting at a table drinking Pfeiffer beer–which was distributed from 11618 Sobieski Street in Hamtramck–or Sophie Tucker sitting with United Auto Workers (UAW) moguls Walter Reuther and Dick Frankenstein, or Jack Dempsey, one-time heavyweight boxing champion of the world. The emcee was Amos Jacobs (Danny Thomas). An artist would come weekly and paint on the exterior of the building a portrait of the entertainer who would be appearing that week as neighborhood children sat and watched the face develop to see if they recognized the star. The Marx Brothers, the Ritz Brothers, Martha Raye, Sophie Tucker and Tony Martin, who was a very popular singer in the 1940s and was married to Cyd Charisse in 1948, were among the stars who appeared at The Bowery. During the 1940s, before they ever became famous on the Jackie Gleason television show, the June Taylor Dancers made up the chorus at The Bowery."

I think I love most, the couple seated behind your Grand Parents with hands on their faces bracing for the flash! How neat that you have this, it truly was a different and wonderful time back then.

The couple seated behind were covering their faces so that they would not be recognized. This was often the case when they were not with their mates.

I worked at the Bowery during the later 1940s developing and printing the photos taken by the camera girls.

My mother worked at the Bowery as a coat check girl in the 40's.

My brother who was known as Red Ray Babula played sax at the Bowery. I still have a flyer and have picture of my brother standing outside of the Bowery.

Does anyone know the address of the original Bowery in Hamtramma

My grandfather is Frank Barbaro.

My friends' dad was Frank Barbaro

My aunt Celia Herrada was a dancer there.

My father Maryan Sawinski known as Mario, was a chauffeur for the Bowery in 1944. At that time there was a girl named Curly Carter who was a roller skater in the act called Rollerdears that performed at the Bowery. He keeps talking about curly and how crazy he was about her, I guess she spent the night at his house. I would love to find information on Curly and maybe pictures. She is now 94 years old. I hope someone can help. It would certainly make an old man's day.