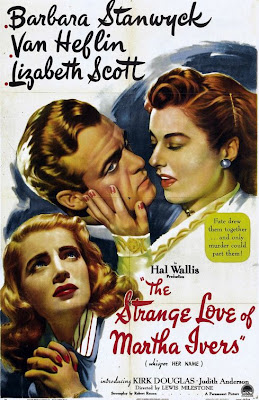 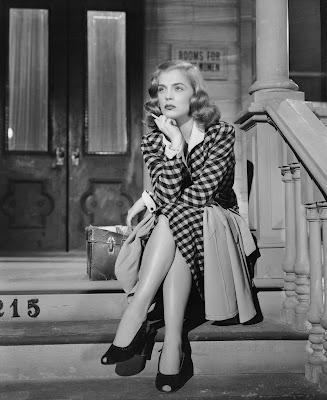 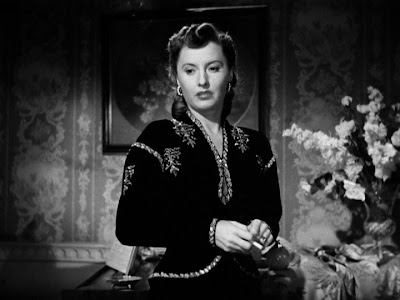 Yay!! I made it this week!! :) So, for some reason I was feeling in a gloomy film mood tonight and decided that a noir would be a great pick for this week's Film Fashion Friday post. Plus, I have a slight obsession with Lizabeth Scott, whom I think is absolutely gorgeous and always seems to be wearing the most envious of outfits on screen.
The Strange Love of Martha Ivers (1946) stars Van Heflin and Lizabeth Scott as a complicted couple who become involved in the messy marriage of Barbara Stanwyck and Kirk Douglas (who was making his pretty impressive filmic debut in this feature). Stanwyck and Scott both wear some really fabulous outfits throughout the course of the film. I especially adore the playsuit set that Scott "models" in the hotel room and all the lounge wear Stanwyck is costumed in. The costumes were done by Edith Head, whom I have featured numerous times in previous weeks. If you are interested in some of her other work, please click on the label at the bottom of the post to be directed to my other posts on her.
The film is not only fashionable, but really well put together too, especially when you consider that this was Douglas's first film role and it was a pretty large part. I feel he started his career with a bang. And, how could he not, while work alongside Stanwyck!
The film is widely available on DVD, is an instant on Netflix, and can be found on YouTube. Click HERE to be directed to part one.
Emily
Labels: Barbara Stanwyck, Edith Head, Film Fashion Friday, Kirk Douglas, Lizabeth Scott, The Strange Love of Martha Ivers, Van Heflin

I've never heard of this one, but I love Barbara Stanwyck. And Edith Head's costumes are always divine!!

sounds like a good one emily. thanks for your excellent classic movie recs.