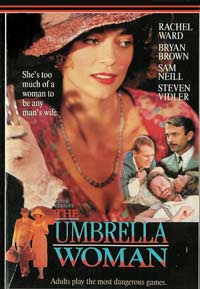 Hi All!! Welcome back to another installment of Film Fashion Friday. This week's main selection and recommendation both come out of the 80s, which has been notorious for not always presenting the best authentic representation of the past. While neither one of these films are by any means perfect when it comes to absolute accurate costuming, I feel that each film overall presents great looks coupled with amazing backdrops of great sets and on site shooting. Both films really embody the past through the use of great sets and props, which sometimes will suck me in more than just lavish costuming! Anyways, on to the selections.
The main film for this week, The Umbrella Woman (aka The Good Wife) (1987), is set in pre-WWII Australia. I caught the last third of this film on THIS network, a sister of NBC. I am assuming that it will be played again before the month is over with, so I would check your local listings since Netflix does not current offer this film for rental. However, the film does appear to still be available on DVD. I located a used coped for under $1.00.
Since I have only seen such a short portion of the film, I can't really comment on the plot itself, but from what I have seen, the costumes were pretty great. Jennie Tate designed the costumes and did a good job to leave out major influences of the 80s, minus big hair and slightly overdone make-up. If you can look past that, I think the costumes are pretty alright.
I really was excited about this while watching it and cannot wait until my copy comes in the mail so I can see the film in its entirety. I had never heard of this before and because of that couldn't wait to share it with you all!! 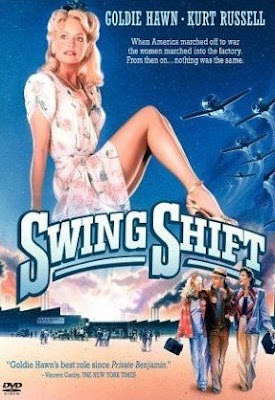 This week's recommendation has been mentioned a few times already in vintage blogland, but I felt it deserved one more shout out. Plus, it's another film made in the 80s, so it went with the theme for this week! Swing Shift (1984) stars Goldie Hawn as a "landgirl" of sorts who takes a job in a plane factory during WWII. As with the film above, the sets in this film are wonderful and make up for the less than authentic hair and make-up on the female characters.
Joe I. Tompkins did the costumes for this film and I feel he did a great job. I am really digging the looks he created for Hawn while working in the factory. I think come this fall, I might be sporting some similar outfits!!
Swing Shift is available on DVD and is an instant on Netflix.
Make sure and check back two weeks from today for the next edition of Film Fashion Friday; which is now appearing every other week! As always, requests are welcomed!!!!
Emily
Labels: Film Fashion Friday, Goldie Hawn, Jennie Tate, Joe I. Tompkins, Rachel Ward, Swing Shift, The Umbrella Woman