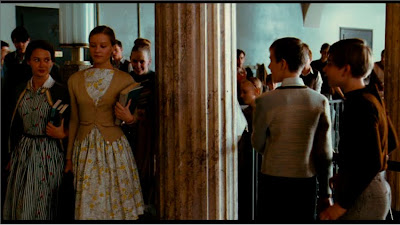 Hello All! Welcome to another week of Film Fashion Friday! This week's pick, The Reader (2008), is a period film set in the mid-50s and spans through to the late 60s (which make up the "flashbacks" of the film). I will admit, if you are not into heavy films, this may not be one to add to your viewing list. The content is deep and kinda raunchy, but the locations and the costuming can be quite stunning. 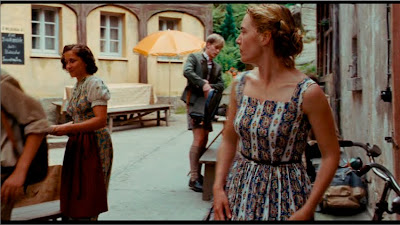 The film stars Kate Winslet as a former SS officer who cannot read or write. She meets Ralph Fiennes, a young student, and takes him in when she sees that he is sick. The two become friends and share a special connection with one another. The story then skips forward to when Fiennes is in college and must witness Winslet on trial for her conduct as a SS officer during WWII. While the narrative is pretty dense, I still was captivated with the lovely sets and location shots; along with the muted fashion choices of Ann Roth and Donna Maloney. 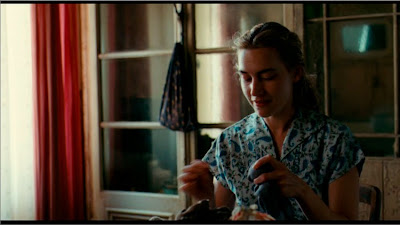 Ann Roth is probably my favorite contemporary costume designer in Hollywood. She is constantly working on period films and often collaborates with Donna Maloney (who seems to be her "right hand man"), as she did her with The Reader. She started her career in the mid-60s and has been contributing her talents to Hollywood ever since. She has been nominated several times for both Emmys and Oscars and holds one Oscar for her costumes in The English Patient (1996).
***I want to let all my readers know that I will now being doing Film Fashion Friday every other week. Since starting this series almost a year ago (the idea was born late September of 2009), I have now begun to see some other bloggers doing similar posts and I want to be able to keep my series fresh and focused. Doing my filmic fashion posts every other week will allow me to choose the best of the best of unknown/little known classic and period films to your attention. I am really excited for my future posts and I hope I am inspiring you to check out new and different film selections!!
Emily
Labels: Ann Roth, Donna Maloney, Film Fashion Friday, Kate Winslet, Ralph Fiennes, The Reader

i love anything kate winslet is in. she is an amazing character actress. i was mesmerized by her performance in "the reader." such plot twists!