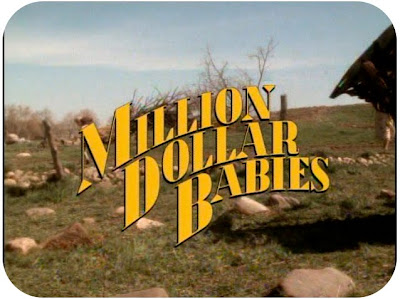 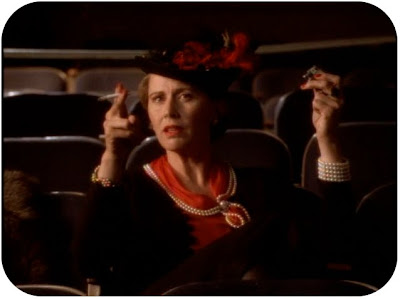 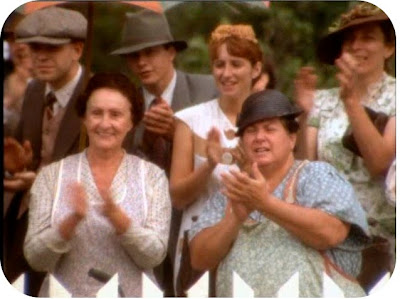 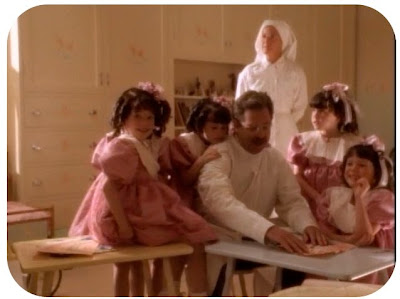 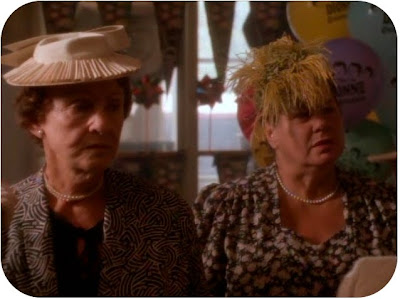 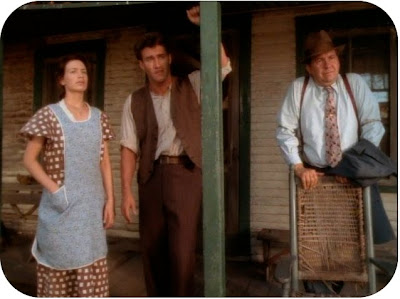 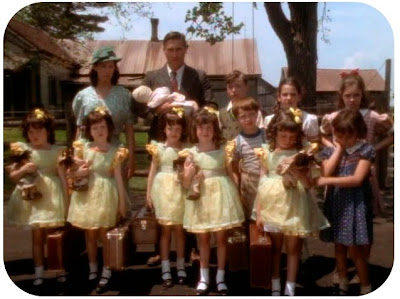 For a really long time now, I have had a mad obsession with made-for-TV movies. I guess my main fascination with them stems from the fact that majority seem to be made about the lives of famous people and are set in the past. Plus, I love anything that's a "tell-all." So for Film Fashion Friday this week I decided to feature one of my all time favorite made-for-TV movies, Million Dollar Babies (1994), the "true" story of the Dionne Quintuplets. I can actually remember watching this mini-series on TV when I was a little girl! And after, I became really interested in the Dionne Quints.
This mini-series spurred a resurgence of replicas of all the famous Dionne Quints memorabilia, such as paper doll books and the Madame Alexander dolls. I can still remember how excited I was to find a reproduction of the original 1930s paper doll of Emilie. I loved it so much that I didn't have the heart to cut into them, even though they were so cute and came with some of the cutest accessories. :) You can find a repro set of the original 1940 paper dolls HERE.
I feel that out of all my made-for-TV movies, this is among the best of the best. The acting is very good and the sets and costuming was executed in a highly authentic manner. Renne April won a Gemini Award for her work on the costumes. The film features numerous examples of 30s farmhouse dresses and casual working class clothing from the Depression into the 40s. This is also contrasted with the look of Helena Reid, the famous reporter from New York, and her staff, who showcase some of the more stylish fashions of the time. Great attention to detail was made all throughout this film, especially with the hats! I am in love with the hats in this film!!
The film was shot on location in Canada and was aired on both Canadian and American television stations. Critics gave the film much praise and it won a total of four Gemini Awards.
What I find most interesting about the film itself is that since a set of identical quintuplet girls were not available to use for the shooting of the film, the directors instead used two sets of triplets to recreate the Quints. I am still amazed that they were able to find two sets of triplets that looks so similar -- I know I was completely fooled by them and thought they were a set of quints themselves.
Million Dollar Babies is available on DVD (although I have heard it is a bit difficult to tract down a copy) and through Netflix.
Quintland has now become a museum and is open to the public for viewing. I know that I really want to make the trip out to Canada to tour the museum!! If any of you have been, please let me know how it is!!
Emily
Labels: Beau Bridges, Celine Bonnier, Film Fashion Friday, Million Dollar Babies, Renee April, Roy Dupuis

OMG I remember this movie!!! I watched it as a child and loved it. But haven't seen it recently enough to look at the great costumes. Thanks for reminding me of it.
-Andi x

I remember this, too...Before Jon and Kate Plus 8 there were the poor Dionne quints.

this looks interesting. i really love seeing the children's clothing. i'll try to find this. i've been having good luck finding classic movies at the public library.

Oh wow! I had forgotten about this movie. I must NetFlix it at once!