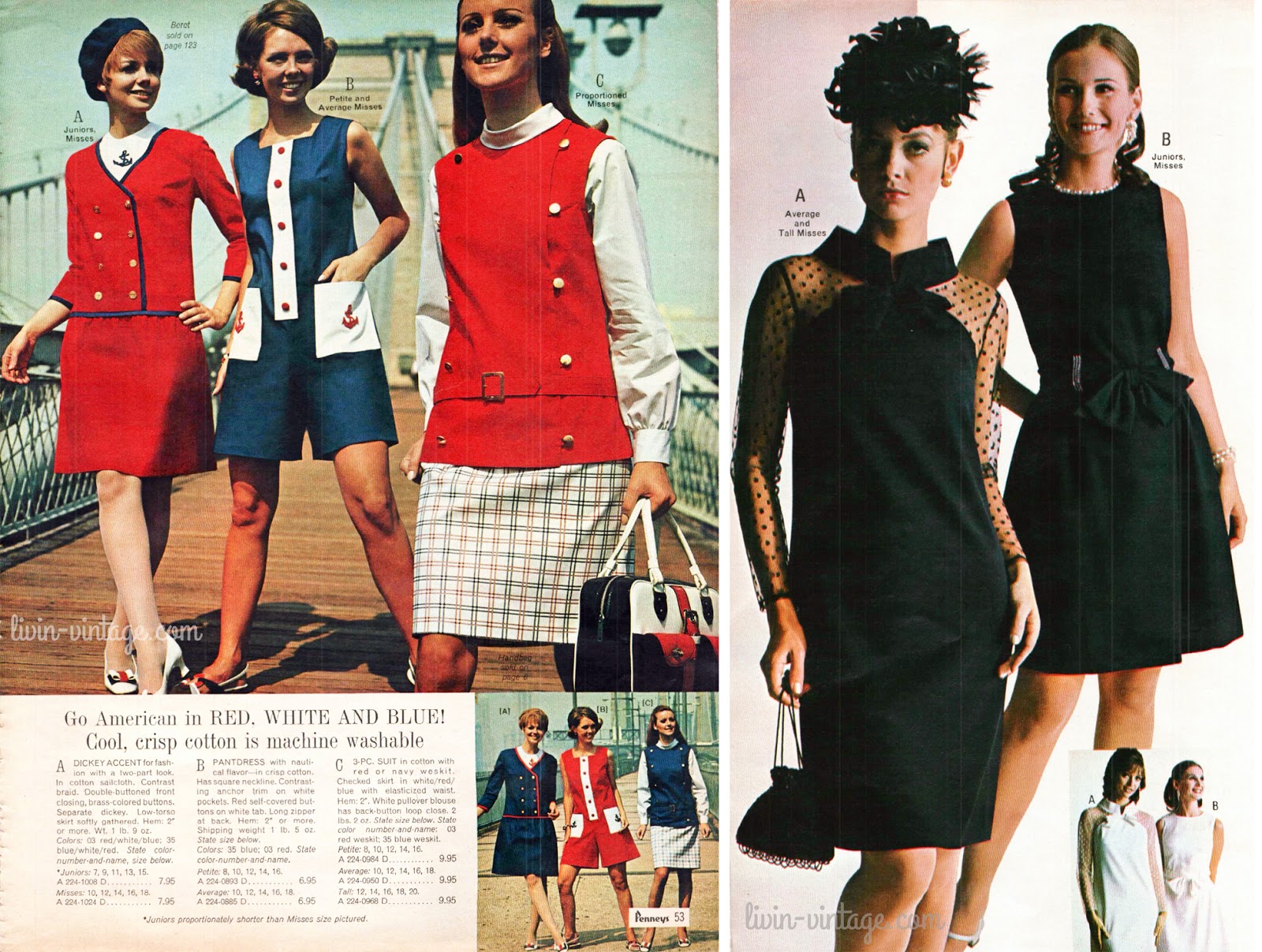 I see Season 7 of Mad Men being one of the most playful seasons yet when it comes to fashion.  When we entered Matt Weiner's world seven years ago, traces of the 1950s could be found woven into the tightly constructed 1960 New York.  Now that we are at the end of both the show and the decade, there's no better time to really push the envelope when it comes to what viewers are used to seeing each character wear.  From the press photos, it seems that shorter hemlines, boxed purses, and patterned hosiery will be all the rage for the females of the show this season.

Here's a look at where I think the show could be headed via a 1969 Spring JC Penny's catalog: 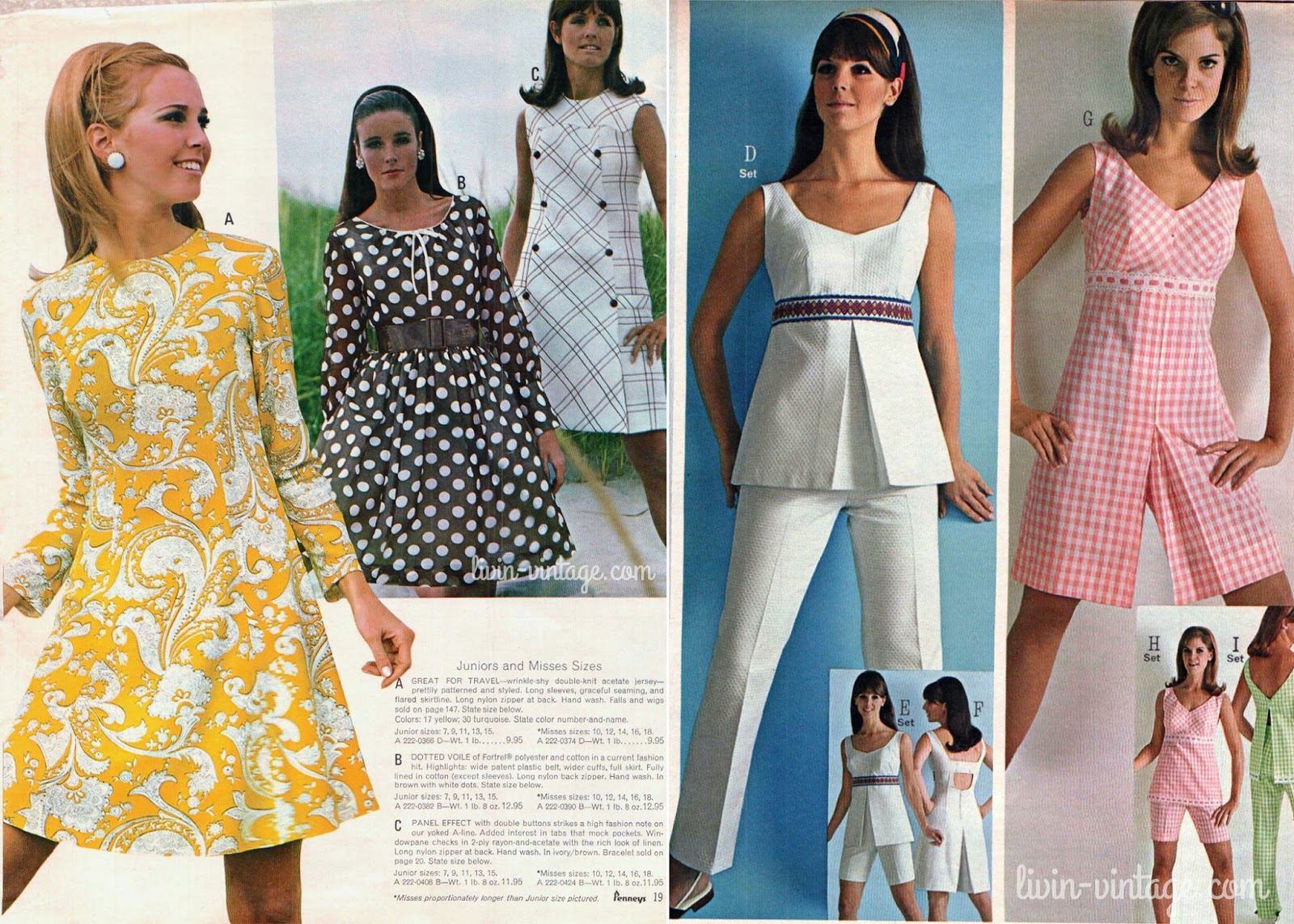 The series has found Betty in her fair share of both pants and shorts, so I am looking forward to seeing how/where Janie Bryant takes Betty this season.  The yellow paisley print dress has the same feel as the purple one she wears in the press photo, so I'm predicting more prints in Betty's closet this season. 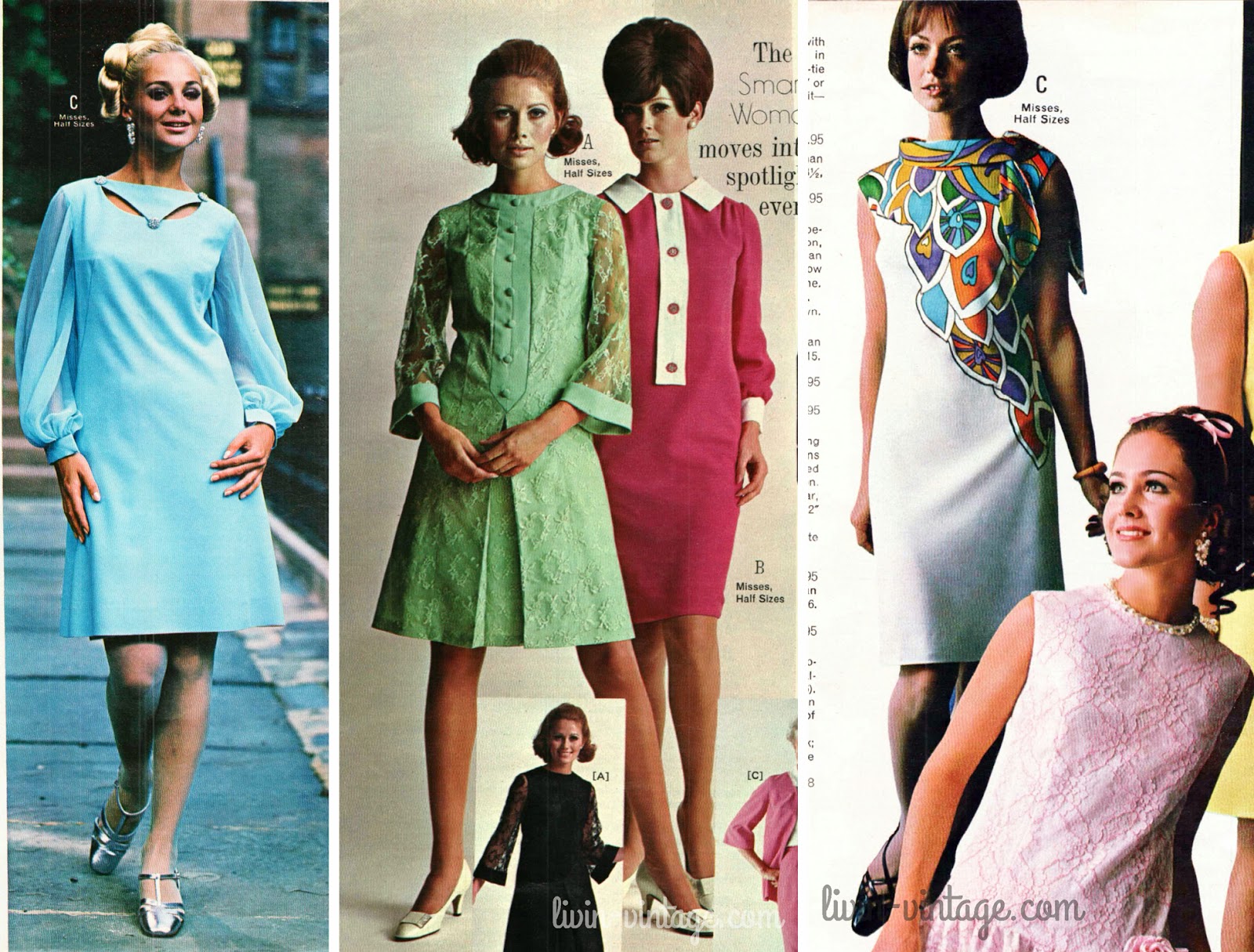 Joan is hands down my favorite character and last season I found myself feeling that many of her looks were down right frumpy.  The straight lines of late 60s fashion doesn't do much for Mrs. Harris' figure, but I am hopeful that this season we might see her in some more fashion forward looks that also flatter her curves.

The blue dress above is reminiscent of the pink dress she is wearing in the press photos -- that pink is a great color for Joanie.  The pink center dress is so curve friendly as is the awesome white shift to the right.  I love that this dress (dress c) has a scarf neckline -- very Joan -- while using the big graphic print to create some shape to the otherwise shapeless dress. 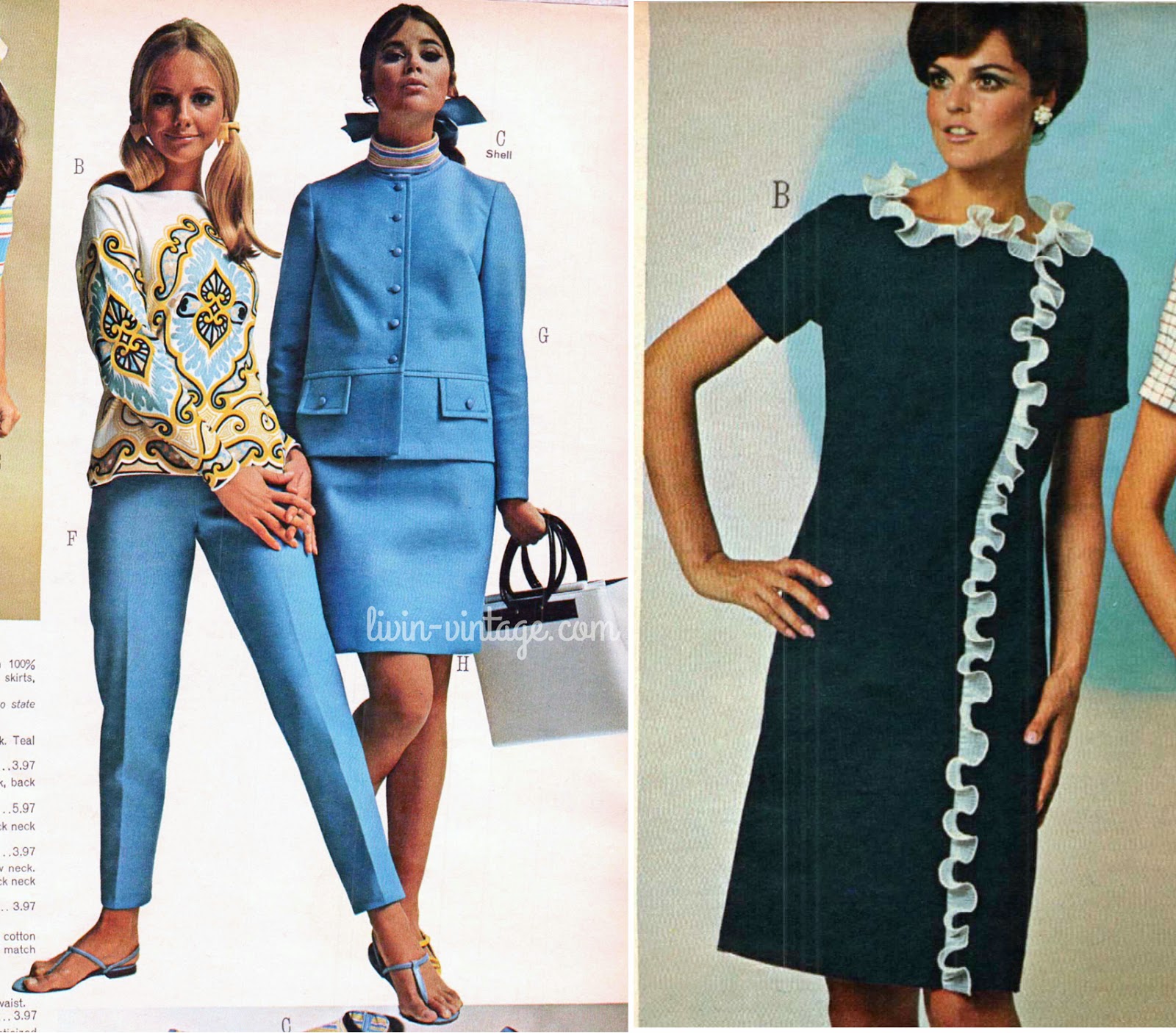 I had to include these two looks -- the second I saw them, they felt so Joan to me.  I hope we continue to see Joan in pants this season; I'd love to see a similar look as the one on the left.  Janie Bryant has put Joan in a lot of ruffles over the course of the show, so this dress would be a prefect office look for Joan this season. 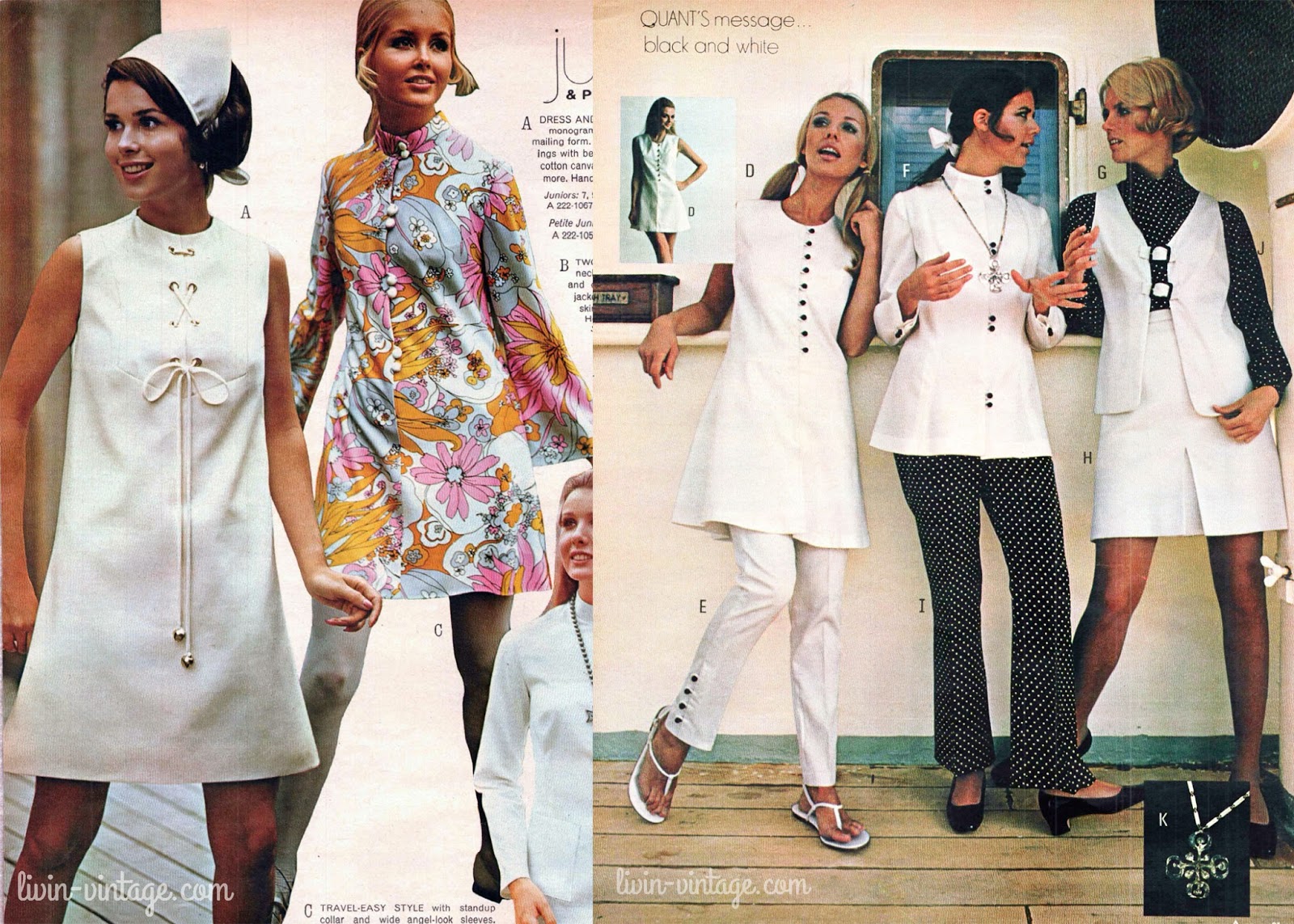 Out of all the characters in the show, I think Megan might be the hardest to predict where she will go fashion-wise.  The press photos have her in a psychedelic print dress with colored tights, but I have a feeling this might change the longer her character is out in California.  I like that dress a on the left has a nod to last season with the head kerchief and the lacing detail on the bodice.  Ultimately, I see Megan moving towards a more bohemian aesthetic by the end of the season. 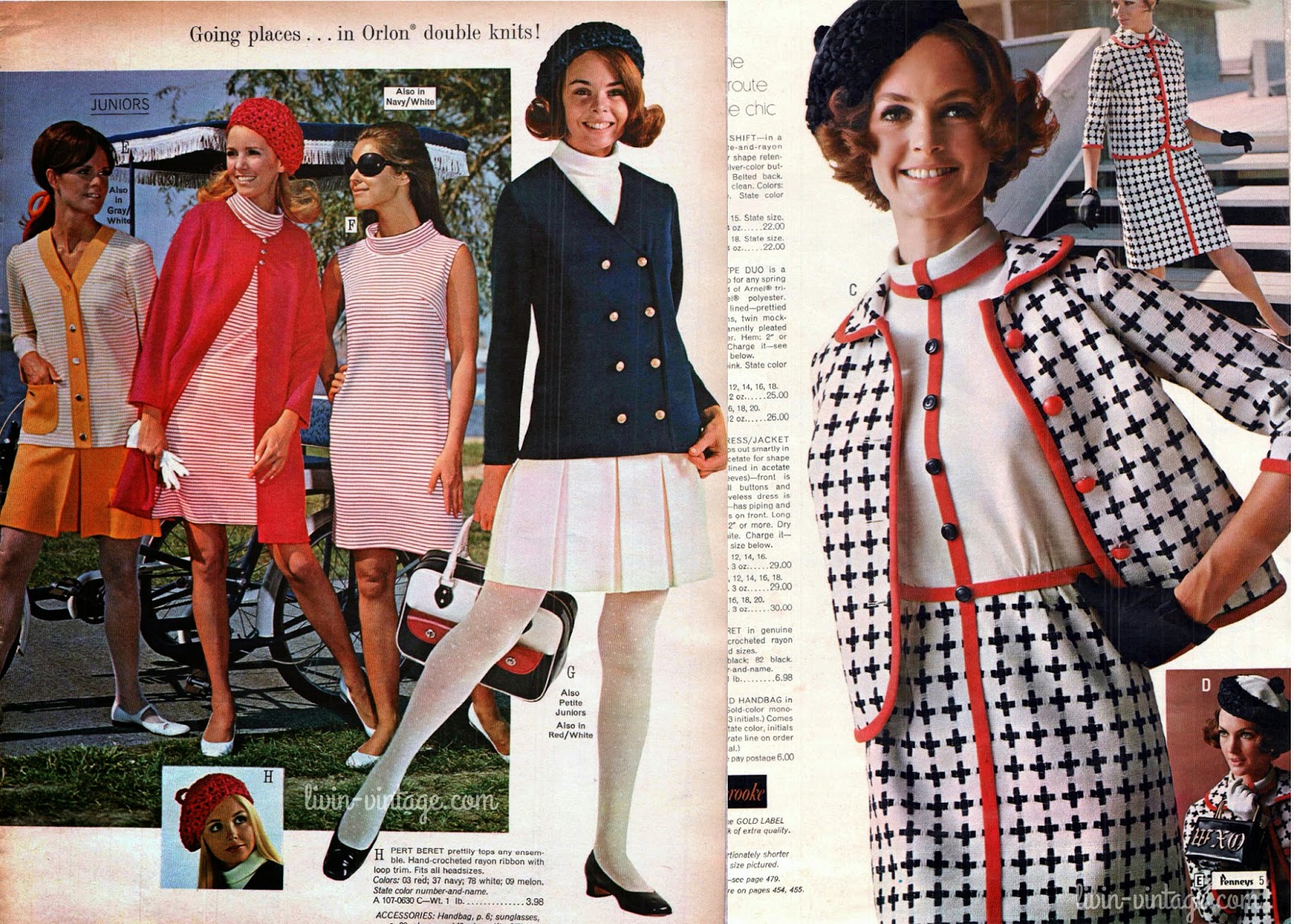 When we left Peggy last season, she was standing in Don's office wearing a fabulous plaid pants suit, signally some seriously changes for the following season.  The recent press photos have Peggy back in a skirt, a drop waisted mini skirt!  This is a fun look for Peggy, however, I can't help but feel it is slight more juvenile than some of her previous outfits, especially the one we are left with at the end of Season 6. 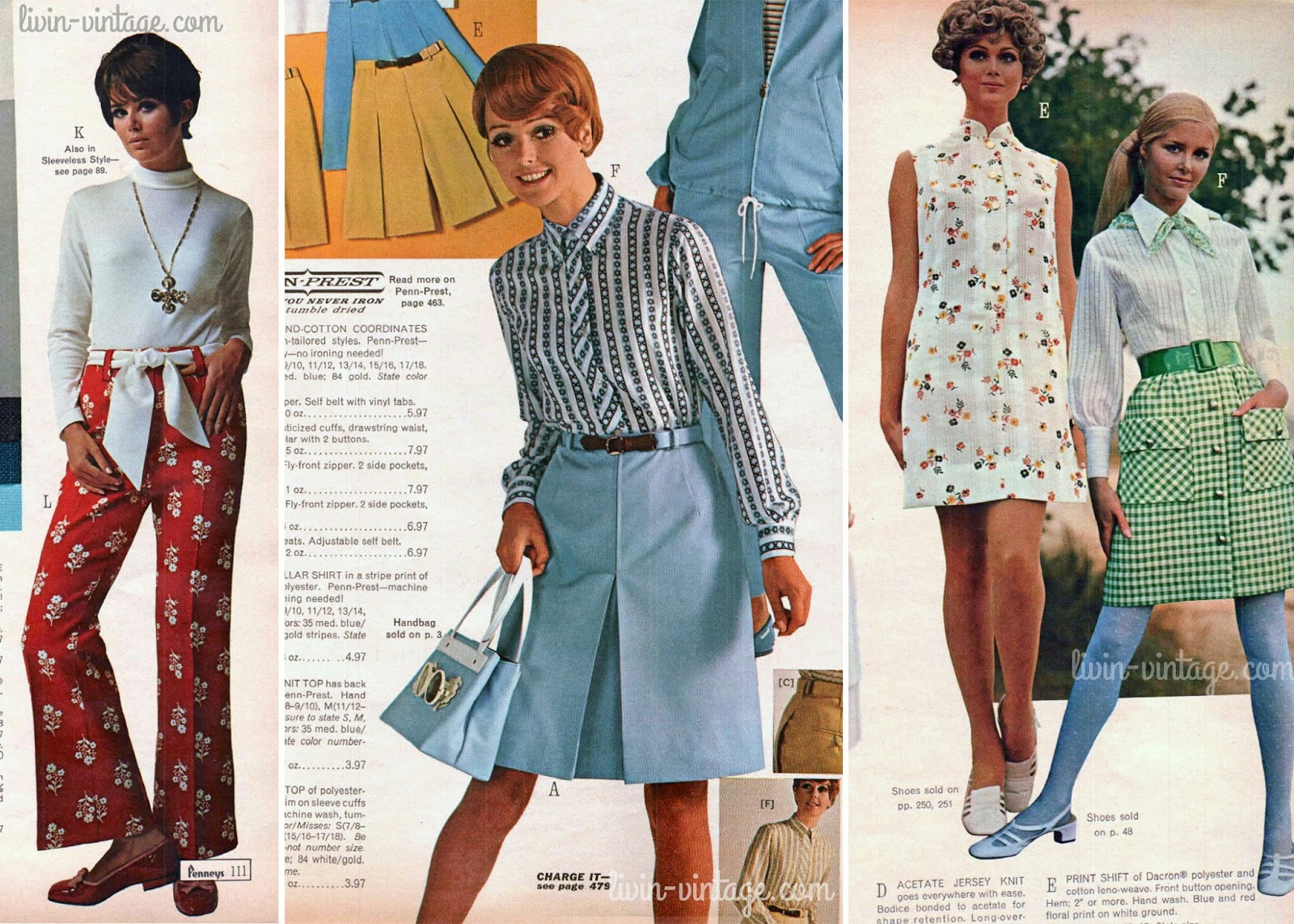 Peggy's character has always been big on separates, a trend I see continued into Season 7.  I also am hopeful for more pants in her life.  It's a good look for Peggy and a way to outwardly express her desire to be considered an equal in the workplace.

I have to say, just based on the press photos, I am a bit surprised to see where the women's fashion is at so far this season -- it still feels very Season 6 to me.  However, as with every season, I am thoroughly excited to see where Janie Bryant takes us.  She is truly one of the most talented costume designers working in the industry right now.

Check back on Friday for more 1969 women's fashion!

Great photos! Thanks for posting.

Great Pictures! I want to see more of this as I want to know more how to style dresses like from 1950's or 60's since I'm into it. I got a lot of vintage dresses from http://www.ebay.com/usr/vintageswank for as low as $0.99.;)

Great write-up, I am a big believer in commenting on blogs to inform the blog writers know that they’ve added something worthwhile to the world wide web!.. www.designeroutletsales.com