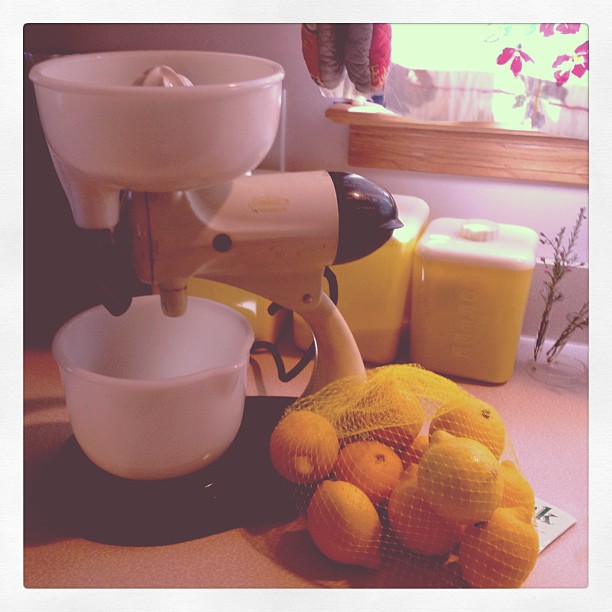 I love being in the kitchen; cooking, baking, the whole nine yards.  I also love kitchen gadgets.  They are one of the very few new things I splurge on.  So since I spend a lot of time in the kitchen, I felt it was time to invest in a stand mixer.  I was looking into getting a KitchenAid when I remembered I had my grandma's vintage Sunbeam mixer in a box in my basement.

The first thing I made was fresh squeezed lemonade with the reamer/juicer attachment.  Let me just say, if you have this mixer and not the reamer attachment, head over to eBay or etsy and get yourself one -- they are AMAZING!!!  They spin quickly and get every last drop of the juice of the fruit.  What would have taken me much longer to juice with a traditional reamer, took me just a few minutes with the attachment. 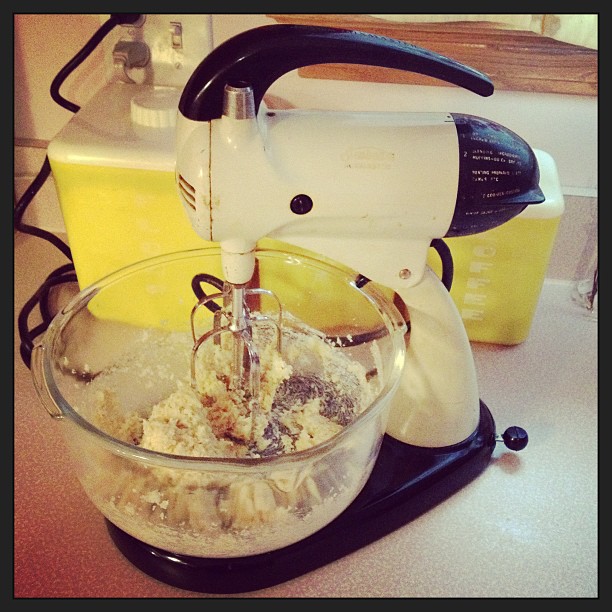 Next I tried the actual mixer part.  I was a bit skeptical; how was this vintage mixer going to stand up to its modern counterparts?  I figured trying a basic cookie recipe was a great way to test out the different functions of this mixer compared to my experiences with the modern KitchenAid.  The bowl rotates while the beaters spin, making for an effective way to combine the ingredients in the bowl.

I gotta say, I was really impressed with this mixer.  And while it doesn't come with all the bells and whistles that a new one does (read pasta maker attachment, ice cream attachment) I love that every time I pull it out, I will think of my grandma.  That's something a new gadget can't ever replace.

I use the same vintage mixer! I don't have the juicer attachment, but love the bowls.

I love the re-design. Looks great! And your mixer is pretty cool too :)

Ah! I just love that you were thinking of buying a new mixer but then remembered your Grandmother's - only to have it exceed expectations. It's so cool that you can use hers and that it's still performing beautifully after all of these years.

I am hunting down myself a mixer now~thanks for inspiring me! It will certaintly be the first "big" thing I buy for my new country cottage.

Your Sunbeam is wonderful! I have my Grandmothers Hamilton Beach mixer that HER MOTHER bought for her in 1946! I had to rewire the electric cord, but other than that it works like a champ!

I've come across some of these in thrift shop but never bought one because I always thought it wouldn't work well, But I definitely give it a go next time. :)

I need to find one of these! I have a cheap mixer and it has one speed and sounds like a small plane. They definitely made things better back in the day. And how sweet that it's your grandma's. <3

That sure brings back some memories for me.....xoxox.
M

Excellent post and very informative as well. Your knowledge appears very well on this topic and the way you have explained it, any new person can understand it easily. I would like you to keep writing like this and share your information with us. double bed razai price , cotton sofa covers online ,