To Have and To Hold 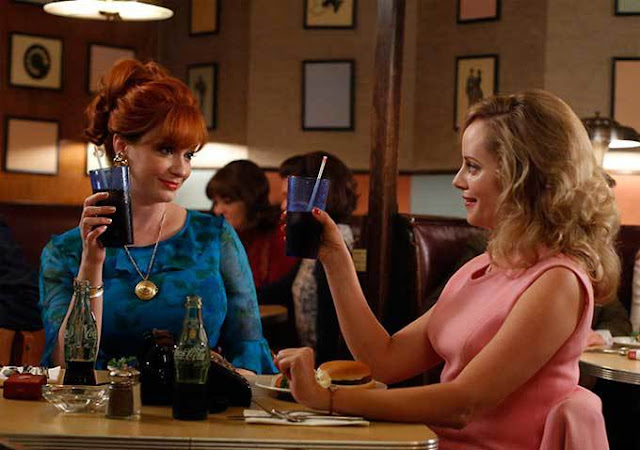 My second podcast with Spacelion's creator Tobi, hit the interwebs on Sunday!  These have been so much fun, although I'm not sure that doing them so early in the morning is the best of my thought process and I think that kind of shows in the latest podcast.  Anyways, you can take a listen HERE, but before you take a listen, here are some additional thoughts I have about episode four, "To Have and To Hold."

While this might be entirely obvious, the more I think about episode 4 the more apparent it is that this episode explores marriage and the relationships of the central characters.  This seems fitting considering that the pervious episode ends with Pete being given what for by Trudy for his failure to handle his philandering with some discretion.

Episode 4 is ripe with a multitude of differing examples of marriages.  It seems that many, if not all the characters featured in this episode are grappling with some sort of marital or relationship issue.

-Dawn has two interesting conversations on the subject of marriage with a friend.  Dawn makes it clear that because her friend is about to embark on marriage, she is afforded certain advantages that Dawn is not.  She also hints at her difficultly in finding a mate.  My feeling is this is because she is a career woman, but the writers haven't really given us much depth into her character to know for sure.

-Joan is joined by friend, Kate and they share a night out on the town.  Both women have powerful positions, yet Kate is married while Joan is separated for her spouse.  They are shown like two school girls, first at a bobby soxer joint and later at a mod club where they both are engaged with younger men.  Then we find the women in bed together the next morning with Joan's sleeve ripped.  While the claim of homosexuality can be derived from this shot, what I feel is more apparent is the fact that both of these women are strong and that can be a turn off for men of their age during this time, thus their appeal to younger men and the absence of their mates.

-We also see the "affair" that SCDP engages in with creating a pitch for Heniz Ketchup.  The episode begins with Don, Pete, and Timmy from Heniz in Pete's apartment -- away from the office and in a place that was purchased for the use of infidelity.  We then have SCDP purchasing a hotel room to present the pitch only to have the people from Heniz invite Peggy's group there as well.  The "marriage" of the client to the company has been broken by SCDP not respecting Rayond's wish and also by Timmy's inability to be faithful, not only to SCDP but also to his wife (he removes his wedding ring before leaving Pete's apartment).

I's also like to point out that Betty is not in this episode.  It seems to me that this could be because she is content in her marriage; we haven't really seen Henry or Betty seek affection outside of each other and they do appear to love one another.  However, knowing how rampant infidelity is in Mad Men, I won't be the least be surprised if this doesn't last.

Check back in two weeks for the next installment!

The other such brand name is of rolex replica uk which was launched by an Italian company founded by Guccio Gucci in 1921 in Florence. These watches are considered to be among the top 100 most brands of rolex replica sale. The brand has also earned about 4.2 billion revenue worldwide according to the report in 2008. Gucci is also considered as a biggest selling Italian brand. Another name in the list of brands is the rolex replica sale produced by Reebok Company. Along with producing other goods like leather replica watches sale. Reebok has also focused on producing branded watches which quit easily acquired the entire market. Because of their breitling replica and models it has become the favorite brand to be worn. Another name in the series of mostly liked brand is the hublot replica watches, which is produced by the thirteen year old company Titan. Titan is often considered to be a world class brand and a Status Symbol.